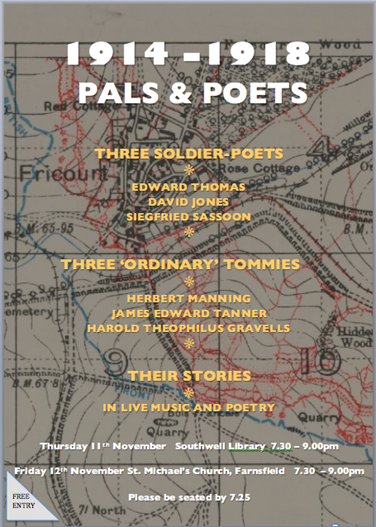 ‘1914-1918 Pals and Poets’ is a multi-media commemoration of the First World War in film, live music and poetry.

The lives of three ‘ordinary’ soldiers are celebrated through the poetry of their descendants, interspersed with poems and brief biographies of four more famous writers, Philip Larkin and three contemporary soldier-poets; Siegfried Sassoon, Edward Thomas and David Jones.

Film elements provide a narrative thread, and folk music links the narrative and provides a third point of emotional contact for the audience.

The poets are from Southwell, Lincoln and Sheffield and have been performing their own work at events and festivals since 2014.  The musicians are well known on the local folk scene and have given lunchtime recitals at the Minster Church in Southwell.

The performance is free to enter, but a voluntary donation to an armed forces charity would be appreciated. There will be two performances, at Southwell Library on Thursday 11th November, and at St Michael’s Church, Farnsfield on Friday 12th November.  Both begin at 7:30pm and last around 90 minutes.