17th January 2019 – More than 80 people packed Southwell Library last night to listen to Nottinghamshire’s Police & Crime Commissioner, Paddy Tipping, defend the record of policing in Southwell while acknowledging that more can be done to give the community better value for money.

Paddy Tipping told the audience that the number of police officers in Nottinghamshire rose above 2,000 in the year to December, from a low of 1,640 three years ago. He expects the budget for 2019/20 to enable him to recruit 40 more officers next year, including another three Community Officers for the Newark area.

“If we’re asking you to pay more for policing,” said Mr Tipping, “we have to deliver more.”

He added that the nature of crime is changing rapidly. “People,” he said, “have a greater chance of being victim of online crime than on the street. Children are more likely to be abused online than in the playground or on the street. The police has to allocate resources to reflect these different types of crime.”

Inspector Heather Sutton told the audience that response times to 999 calls from Southwell is 12.9 minutes, well below the Nottinghamshire force’s target on 15 minutes. 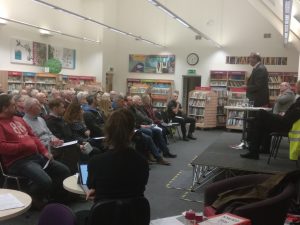 Questions from the audience covered a wide range of topics, from the perceived absence of a police presence in Southwell, how the force feeds into intelligence gathering networks, poor and illegal parking, anti-social behaviour and PCSO Dunn’s powers to deal with it, to speeding cars, allocation of resources, agile working and value for money from Nottinghamshire’s Police Authority.

Inspector Sutton argued that officers do actually spend a lots of time in Southwell in patrol and response vehicles, though admitted they are not as visible as they should be. She said that Southwell has a Beat Officer, based in Ollerton, and she will ensure that the Officer has a greater presence in the town in the future, to back up the PCSO Richard Dunn. Inspector Sutton also referred to discussions with Southwell Town Councils and the Force’s Estates management for Police Officers to have 24 hour access to the facilities in the Old Court House building, which will mean they are able to come into the town more often, especially at night-time.

County Councillor Bruce Laughton praised the excellent work of PCSO, Richard Dunn, whom he described as a real asset to Nottinghamshire Police.